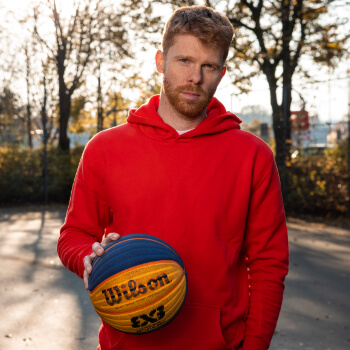 Emre has been a life-long basketball fanatic. Born in Istanbul, spent his early playing career at Anadolu Efes and the turkish youth national teams where he served as captain 27 times.

He graduated 2000 from the french High School ‘Lycée Saint-Benoît’.

After high school he went on to study in the USA at Western Carolina University on a full athletic scholarship, where he played 4 years and graduated with an international business degree.

As Emre decided to focus on his business career in Germany, he kept playing basketball and coaching youth. Bielefeld became his home and TSVE 1890 his home club where he still is the head of the basketball operations.

2010 was the year where Emre played his first 3X3 tournament at Moscow Open. The same year he founded his own travel and sports merch company Atsür GmbH.

The main focus of Atsür GmbH shifted over the years to sports management. Emre launched 3x3prime together with his brother Engin in 2020.

Parallel to his responsibilities at 3X3prime, Emre is also coaching the German 3X3 U23 Men’s national team during the summer.

Emre is the son of Renate and Çetin. He is married to Dzenana and they have 2 daughters.